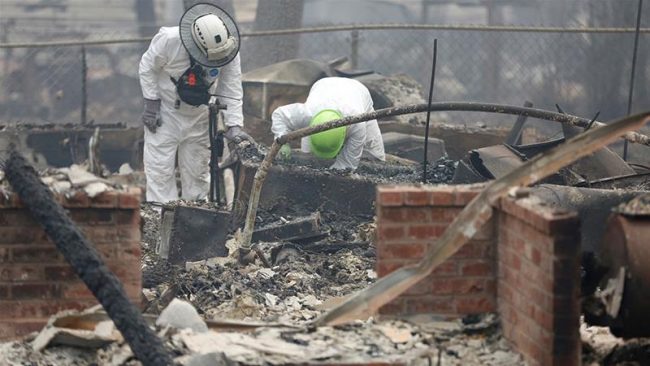 An army of searchers moved through the rubble of Paradise in a desperate search Friday to find more victims of California’s worst fire on record as the number of people missing skyrocketed.

The death toll from the devastating Camp fire rose to 71 Friday, while the number of people reported missing jumped to more than 1,000, authorities said.

The number of people unaccounted for rose to 1,011, up from 631 on Thursday evening, after authorities combed through additional 911 calls, emails and other reports generated at the peak of the chaotic evacuation.

Honea said that number may include some people who are counted twice or others who may not know they were reported missing.

The staggering toll was announced as President Trump made plans to visit California to meet with people affected by the wildfires. It would mark his second trip as president to the nation’s most populous state.

The Camp fire is by far the worst wildfire in recorded California history. By Thursday evening, the blaze had chewed through 141,000 acres and 11,862 structures, destroying an entire town in hours. Officials said it could take weeks to complete the search for victims. Thousands of survivors are without homes, living in shelters and tent cities.

Mandatory evacuation orders were lifted in some areas and reduced to warnings as fire crews on the front lines boosted containment to 40%.

“What that means is, if conditions change and fire begins to threaten that area, you have to be ready to go,” Honea said.

The fire is also causing a major public health problem as smoke choked huge swaths of Northern California, including Sacramento and the Bay Area. Dozens of schools across the region canceled classes as authorities urged residents to remain indoors.

At a town hall meeting in Chico late Thursday, Denise Davis showed up to reconnect with her community. There, the 53-year-old Paradise resident saw a neighbor whom she last saw in a driveway carrying someone else’s dog during evacuations.