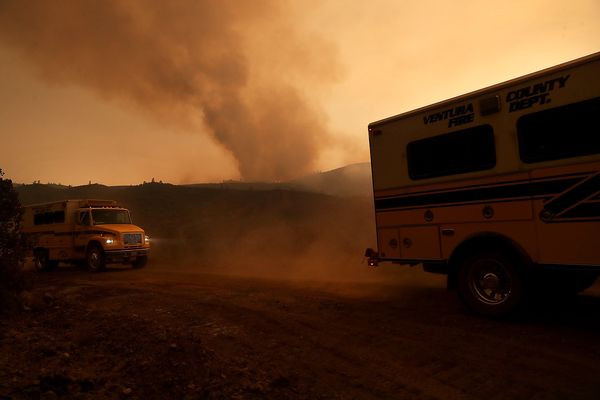 California is poised to set an annual record it never wanted to break: the amount of earth scorched by wildfires.

Blazes have already ripped through enough acres to blacken the entire state of Delaware, and what’s typically California’s worst month for fires is just beginning.

Parched grasses and brush are providing ample fuel for more fires to start. About 88 percent of California was abnormally dry as of Oct. 2, and almost half of it was in some stage of drought, according to the U.S. Drought Monitor in Lincoln, Nebraska. A year ago, only 8.2 percent of the state was in drought.

“The landscape is definitely dry and we’re definitely having fire issues continue,’’ said Mike Anderson, California’s state climatologist. “For the second year in a row we’re setting records for the size of fires, that is definitely not a good trend.’’

The possible repercussions are huge: Insured losses from wildfires that tore through the state in October and December last were about $12 billion, according to the California Department of Insurance. State utilities PG&E Corp. and Edison International face billions of dollars in potential liabilities.

Already, investigators have found that PG&E equipment caused 16 fires in wine country last year. They’re still trying to determine whether PG&E played a role in causing the Tubbs fire and whether equipment from Edison’s Southern California Edison utility started the second-largest blaze in state history, the Thomas fire that burned in December. It lost the top slot in July when the Mendocino Complex burned more than 1.5 times more land.

One silver lining is that most of the state’s large reservoirs are at about average capacity.

It’s hard to say how wet California’s rainy season, which is just starting, will be. Both Anderson and Pete Fickenscher, a service coordination hydrologist with the California Nevada River Forecast Center in Sacramento, said there is a chance a weak El Nino could form in the Pacific. While the weather-changing phenomenon can bring more rain to California when it’s strong, weaker events don’t offer many clues.

And in the short term, it may not matter.

“Rain will not make a difference,” Cal Fire’s McLean said, noting that grass can dry out in an hour and “the vegetation is still very dry.’’

Rain can be a mixed blessing. While it can soak dry plants — potentially slowing fires — it also can trigger deadly floods and mudslides in areas where fires have already scorched the earth, McLean said.

“Anyone who lives or travels around the burns scars needs to be aware,’’ he said.

To contact the editors responsible for this story: Joe Ryan at [email protected], Margot Habiby