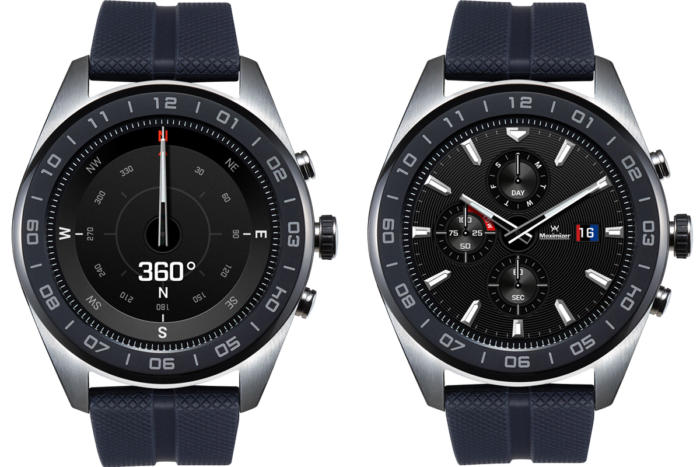 Android Wear recently got a substantial overhaul, and now it needs some fancy new hardware to run on. That’s where LG’s new Watch W7 comes in. It might not have the most elegant name, but it does pack interesting quirk: in addition to the touch-friendly 1.2-inch LCD screen, the W7 has a pair of mechanical hands so you stay on schedule even after the watch’s battery dies.tv

This isn’t exactly novel — we’ve seen startups like MyKronos adopt the idea for its ZeTime smartwatch — but big-name device makers haven’t been as quick to embrace this more analog approach. We’re not really sure why, either: smartwatch battery has gotten consistently better over the last few years, but they’ve never been able to outlast a trusty old Seiko or Citizen. LG says that the W7 will run in its full-blown smartwatch mode for about two days off a single charge, which is about par for the smartwatch course right now. Kick the wearable into watch-only mode and you can expect those watch hands to keep ticking for up to 100 days.

There are some caveats to keep in mind, however. For one, the W7’s stainless steel body looks decidedly masculine, and so far there’s no word of smaller models meant for people with more delicate wrists. The W7 also uses one of Qualcomm’s aging Wear 2100-series chipsets with 768MB of RAM rather than the company’s new Wear 3100 silicon, which isn’t exactly a surprise. Qualcomm only just revealed the new chipset a few weeks ago, but its blend of high-performance, low-power and efficiency cores mean smartwatches will soon be able to adapt themselves more readily to different use cases.

The W7’s mechanical hands give the watch more flexibility than a lot of its current rivals, but we can’t shake the feeling that Wear 3100 watches will soon make wearables like the Watch W7 feel a little lacking. Oh, and there’s the price to consider too: when the W7 goes on sale on October 14th, it’ll set you back $449. We’ll need to get our hands-on the thing to really see if it’s worth the asking price, but hey — considering the current crop of Wear OS watches, LG definitely gets some points for ambition.