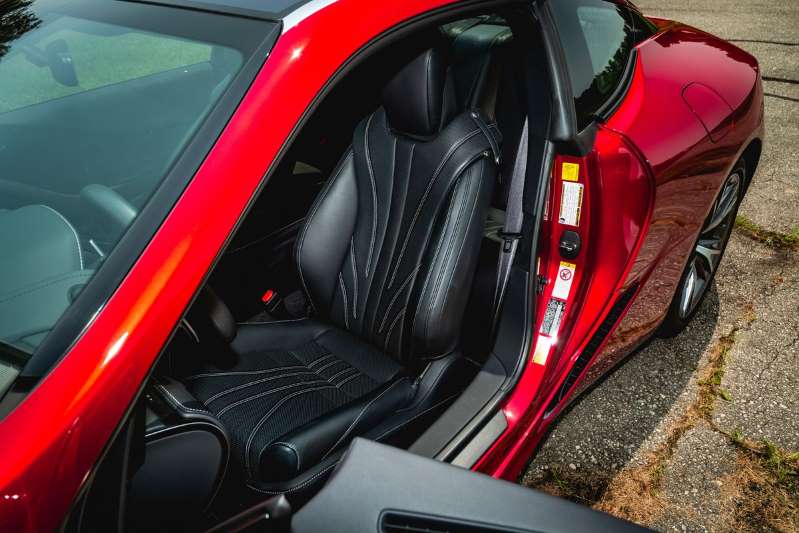 We’re not in the business of summarizing cars in single words, but Lexus’s LC500 coupe makes it tempting to try: It’s squishy. Maybe that isn’t the word Lexus would prefer, but the curvaceous body does look as if it was squished into being, the V-8 engine thrusts the car forward in squishy smoothness, and the ride quality is oh so squishy.

For 2019, Lexus has made the LC500 even softer, retuning the adaptive dampers to deliver an even more buttery ride. The automaker also ironed out the at-times untoward gear change behavior we experienced from the 10-speed automatic transmission in our test of a 2018 LC500. Wisely, Lexus left the drop-dead styling alone inside and out, though we wish it had addressed the car’s one major failing: the finicky touchpad controller (it works like the pad on a laptop) for the dashboard infotainment screen.

Perhaps aware of our past criticisms of the first-year LC500’s sometimes choppy ride with its big 21-inch wheel package, as well as its artificial-feeling rear-wheel steering option, Lexus sent us a 2019 LC500 with neither feature for this test.

Not only does the LC500 ride beautifully in its default Comfort drive mode, in which the electronically adjustable dampers are at their most compliant, it drives with a more straightforward demeanor overall. Without weird inputs from the rear wheels while turning, the LC simply changes direction as effortlessly and deliberately as it cruises in a straight line. This remains a decidedly un-sporty car, with well-isolated steering and moderate lean in corners.

Built for Comfort, Not Speed

Unremarkably, none of the minor changes for 2019 result in any surprise differences in the LC500’s objective performance. This test car was a negligible 0.1-second slower to 60 mph than last year’s model—reaching that speed in a decent 4.7 seconds—while its taller-profile tires generated notably less grip on the skidpad (0.88 g versus 0.93 g) than the 21-inch rubber on our previous example.

Forty years ago, this smooth operator probably would have had opera windows and a vinyl roof, maybe an eight-track player. Today, it’s an edgy knockout, a concept car that somehow escaped the auto-show stand and went directly on sale to the public. Its eye-catching looks haven’t softened in the two years since it debuted, but we can confirm that, for 2019, it is a little squishier. That’s just how it should be, and it’s great news for the upcoming convertible model.